skip to main | skip to sidebar

I was going to post pictures of my new place, but my roommate just did that on her blog. Click here to check it out! Or better yet, come by for coffee or dinner sometime to see it for yourself!
Posted by Lindsay Tuttle at 2:46 PM 1 comment: 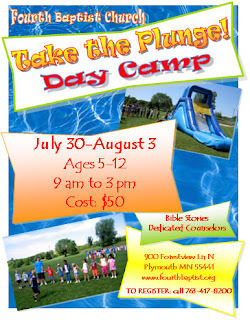 A few weeks ago, I was praying with a friend. She mentioned that her young daughter wasn't sure about her own personal relationship with Christ, so we prayed for her specifically that night. The little girl, and that family, has come to mind a few other times since then.

Then last week I was in the blessed position of working half days (mornings) at good, old General Mills and spending my afternoons at my church's day camp, telling the daily missionary story.

Now, I don't know how many of you went to day camp or VBS/VBT when you were little, but I did. And I specifically remember the missionary story teller. Her name was Melanie Sieple (sp?). She told great stories with these old flip books and left us with a cliff-hanger every day. You know, "and all of a sudden, 8000 fierce warriors jumped out of the bushes!! If you want to find out if Missionary Mike survives . . . come back tomorrow!" I only pulled that once in the week, just to say I had. But I digress.

I never know how much kids are really paying attention and catching what you're saying . . . especially since little kids aren't really my thing. I'll choose adults any day! Anyway, this past Wednesday night, a day camp mom told me that her little girl's teddy bears had been learning Chinese while having a tea party that afternoon. How cute is that?! And last night (Sunday) another day camp mom told me that her little girl (the one I had prayed with the mom about a few weeks earlier) had come home saying that she wasn't sure she had peace in her heart like Hudson Taylor didn't have peace in his heart before he accepted Christ's gift for himself! I chatted with the little girl's dad later, who said he had seen such a change in her since then!

I'm rejoicing with the angels on this one!!

Posted by Lindsay Tuttle at 11:42 AM No comments: